‘I have thought it not superfluous to say a few things about the nature of this people both in mind and body, that is to say, of their mental and physical characteristics…

Irish Dress
Although they are fully endowed with natural gifts, their external characteristics of beard and dress, and internal cultivation of the mind, are so barbarous that they cannot be said to have any culture. They use very little wool in their dress and that itself nearly always black – because the sheep of that country are black – and made up in a barbarous fashion. For they wear little hoods, close-fitting and stretched across the shoulders and down to a length of about eighteen to twenty-two inches, and generally sewn together from cloths of various kinds, Under these they wear mantles instead of cloaks. They also use woollen trousers that are at the same time boots, or boots that are at the same time trousers, and these are for the most part dyed.

Battle Customs
When they are riding, they do not use saddles or leggings or spurs… Moreover, they go naked and unarmed into battle. They regard weapons as a burden, and they think it brave and honourable to fight unarmed. They use, however, three types of weapons – short spears, two darts … and big axes well and carefully forged, which they have taken over from the Norwegians and the Ostmen…They are quicker and more expert than any other people in throwing, when everything else fails, stones as missiles, and such stones do great damage to the enemy in an engagement.

Husbandry
They are a wild and inhospitable people. The live on beast only, and live like beasts. They have not progressed at all from the primitive habits of pastoral living. While man usually progresses from the woods to the fields, and from fields to settlements and communities of citizens, this people despises work on the land, has little use for the money-making of towns, contemns the rights and privileges of citizenship, and desires neither to abandon, nor lose respect for, the life which it has been accustomed to lead in the woods and countryside.

They use the fields generally as pasture, but pasture in poor condition. Little is cultivated, and even less sown. The fields cultivated are so few because of the neglect of those who should cultivate them. But many of them are naturally very fertile and productive. The wealth of the soil is lost, not through the fault of the soil, but because there are no farmers to cultivate even the best land: ‘the fields demand, but there are no hands.’ How few kinds of fruit-bearing trees are grown here! The nature of the soil is not to be blamed, but rather the want of industry on the part of the cultivator. He is too lazy to plant the foreign types of trees that would grow very well here.

Mineral Wealth
The different types of minerals, too, with which the hidden veins of the earth are full, are not mined or put to any use, precisely because of the same laziness. Even gold, of which they are very desirous – just like the Spaniards – and which they would like to have in abundance, is brought here by traders that search the ocean for gain.

Industry
They do not devote their lives to the processing of flax or wool, or to any kind of merchandise or mechanical art. For given only to leisure, and devoted only to laziness, they think that the greatest pleasure is not to work, and the greatest wealth is to enjoy liberty.

Behavior
This people is, then, a barbarous people, literally barbarous. Judged according to modern ideas, they are uncultivated, not only in the external appearance of their dress, but also in their flowing hair and beards. All their habits are the habits of barbarians. Since conventions are formed from living together in society, and since they are so removed in these distant parts from the ordinary world of men, as if they were in another world altogether and consequently cut off from well-behaved and law-abiding people, they know only of the barbarous habits in which they were born and brought up, and embrace them as another nature. Their natural qualities are excellent. But almost everything acquired is deplorable…

This is a filthy people, wallowing in vice. Of all peoples, it is the least instructed in the rudiments of the Faith. They do not yet pay tithes or first fruits or contract marriages. They do not avoid incest. They do not attend God’s church with due reverence. Moreover, and this is surely a detestable thing, and contrary not only to the Faith but to any feeling of honour – men in many places in Ireland, I shall not say marry, but rather debauch, the wives of their dead brothers. They abuse them in having such evil and incestuous relations with them…

Moreover, above all other peoples they always practise treachery. When they give their word to anyone, they do not keep it. They do not blush or fear to violate every day the bond of their pledge and oath given to others – although they are very keen that it should be observed with regard to themselves. When you have employed every safeguard and used every precaution for your own safety and security, both by means of oaths and hostages, and friendships firmly cemented, and all kinds of benefits conferred, then you must be especially on your guard, because then especially their malice seeks a chance…

From an old and evil custom they always carry an axe in their hand as if it were a staff. In this way, if they have a feeling for any evil, they can the more quickly give it effect. Wherever they go they drag this along with them. When they see the opportunity, and the occasion presents itself, this weapon has not to be unsheathed as a sword, or bent as a bow, or poised as a spear. Without further preparation, beyond being raised a little, it inflicts a mortal blow. At hand, or rather, in the hand and ever ready is that which is enough to cause death…

Crowning an Irish King
Woe to brothers among a barbarous people! Woe to kinsmen! When they are alive they are relentlessly driven to death. When they are dead and gone, vengeance is demanded for them. If this people has any love or loyalty, it is kept only for foster children and foster brothers… There is in the northern and farther part of Ulster, namely in Kenelcunill, a certain people which is accustomed to appoint its king with a rite altogether outlandish and abominable. When the whole people of that land has been gathered together in one place, a white mare is brought forward into the middle of the assembly. He who is to be inaugurated, not as a chief, but as a beast, not as a king, but as an outlaw, has bestial intercourse with her before all, professing himself to be a beast also. The mare is then killed immediately, cut up in pieces, and boiled in water. A bath is prepared for the man afterwards in the same water. He sits in the bath surrounded by all his people, and all, he and they, eat of the meat of the mare, which is brought to them. He quaffs and drinks of the broth in which he is bathed, not in any cup, or using his hand, but just dipping his mouth into it round about him. When this unrighteous rite has been carried out, his kingship and dominion have been conferred.’

Musical Ability
I find among these people commendable diligence only on musical instruments, on which they are incomparably more skilled than any nation I have seen. Their style is not, as on the British instruments to which we are accustomed, deliberate and solem but quick and lively; nevertheless the sound is smooth and pleasant.

It is remarkable that, with such rapid fingerwork, the musical rhythm is maintained and that, by unfailingly disciplined art, the integrity of the tune is fully preserved throughout the ornate rhythms and the profusely intricate polyphony—and with such smooth rapidity, such 'unequal equality', such 'discordant concord'. Whether the strings strike together a fourth or a fifth, [the players] nevertheless always start from B flat and return to the same, so that everything is rounded off in a pleasant general sonority. They introduce and leave rhythmic motifs so subtly, they play the tinkling sounds on the thinner strings above the sustained sound of the thicker string so freely, they take such secret delight and caress [the strings] so sensuously, that the greatest part of their art seems to lie in veiling it, as if 'That which is concealed is bettered—art revealed is art shamed'.

Thus it happens that those things which bring private and ineffable delight to people of subtle appreciation and sharp discernment, burden rather than delight the ears of those who, in spite of looking do not see and in spite of hearing do not understand; to unwilling listeners, fastidious things appear tedious and have a confused and disordered sound.

One must note that both Scotland and Wales, the latter by virtue of extension, the former by affinity and intercourse, depend on teaching to imitate and rival Ireland in musical practice. Ireland uses and delights in two instruments only, the cithara (likely a harp) and the tympanum (perhaps a hammer dulcimer). Scotland uses three, the cithara, the tympanum and the chorus. Wales uses the cithara, tibiae (whistles, flutes) and chorus. Also, they use strings made of brass not of leather. However, in the opinion of many, Scotland today not only equals Ireland, her mistress, but also by far outdoes and surpasses her in musical skill. Hence many people already look there as though to the source of the art.
Posted by Professor Dennis Doyle at 11:05 AM 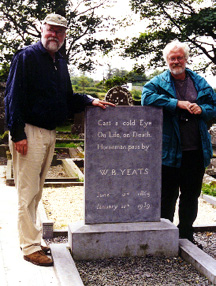